ARE YOU SHOUTING AT ME?

Every once in a while some clueless social media newbie types a message in all caps. Someone inevitably takes the newbie to task, explaining that in social-media-land, writing in all caps means you're shouting.
Why are we still writing drawing general notes in all capital letters?
Are we shouting the message of the note because we think it's so important?
Or is it just traditional?
Writing in all caps seems archaic to me. It's a practice we can't seem to let go of, like doric columns, or divided-lite windows, or fake plastic shutters flanking windows, or wood grain texture embossed into vinyl siding.  It's a relic of the era when text on drawings was hand or template lettered, and drawings were produced with parallel rules or t-squares, triangles, and lead holders.
When everything is capitalized, nothing is emphasized. Punctuation becomes less prominent, like road signs obscured by overgrown roadside trees. The text is much harder to read. The directions to the contractor blur together and seem to recede in importance, making it easy for the lazy to dismiss the notes as mere “boilerplate”.
When everything is in caps, it's much harder to grasp the very real, and usually very important, directions we're trying to give the contractor in the general notes.
It’s my opinion that drawing general notes, and maybe all drawing notes, should be written in sentence case, i.e upper/lower.
Take a look at this snippet from a recent project's electrical general notes. I don't mean to pick on electrical engineers. All disciplines have the same issue. 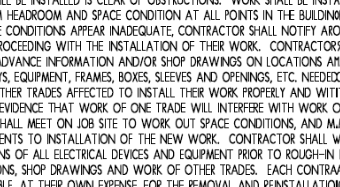 All caps, exacerbated by inadequate line spacing, render this an illegible mess. I think it would be much clearer in sentence case.
Imagine the reaction if we wrote specifications in all upper case text.
What do you think?
Posted by Specologist at 9:41 PM